The Bregenzerwald is an area of rolling hills, mountain valleys and small villages in the area to the east of Bregenz and between the border with Germany and the main Ill valley running towards the Arlberg region and the Tyrol.

Lack of easy access for package holidays has meant that many tourist areas in the Vorarlberg have remained relatively unknown on the English-speaking market compared to the famous walking and skiing resorts of the neighbouring province of the Tyrol.

Summer in the Bregenzerwald

The Bregenzerwald is, however, one of the jewels in Austria’s vast range of walking areas and it has certainly become popular with German and Swiss visitors.

The Vordere Bregenzerwald is the area closest to Bregenz and Lake Constance and is a hilly area of meadows and mountain pastures, while the Hintere Bregenzerwald, which rises up to the Hochtannberg Pass and the route over into the Tyrol and the Lech Valley, hosts the higher mountains and most of the region’s ski resorts and mountain lifts.

Winter in the Bregenzerwald

The Bregenzerwald is full of smaller ski areas which make it an ideal region to use public or private transport to sample a different ski resort each day.

The largest areas are Warth-Schröcken – which is now linked in to Lech and thus the massive SkiArlberg area – and Damüls-Mellau, which links three villages and their ski areas.

Cross-country skiing and winter walking are also very popular in the mountains and valleys of the Bregenzerwald. And snowshoeing enthusiasts can take advantage of the many weekly guided snowshoe hikes which are offered by various local tourist offices.

Travel to the Bregenzerwald

By far the easiest way of getting to the Bregenzerwald is by car. There are no main railway lines into the area, although there is an extensive public bus system which is covered by the Bregenzerwald Card. This is included free of charge for those staying three nights or longer in the region.

Nearest Airport to the Bregenzerwald

Probably the most convenient airport is that at Friedrichshafen just over the border in Germany. This is one of the airports which is popular with low-cost airlines and thus the destinations offered can vary wildly from year to year. The most convenient main airports would either be Zürich to the west or Innsbruck to the east.

Nearest Train Stations to the Bregenzerwald

The most convenient main line railway stations would probably be those at Bregenz or Dornbirn. A bus service runs from the main Rhine valley up into the Bregenzerwald.

Up until 1983 there was a train service into the Bregenzerwald: the Wälderbähnle ran between Bregenz and Bezau. Nowadays it is still in operation but only as a ‘museum train’ between Schwarzenberg and Bezau on the weekends (some services are with a steam train).

Best Accommodation Bases for the Bregenzerwald

The biggest centre in the Bregenzerwald is the community of Egg. It has good transport connections, but most walkers would probably prefer to be closer to the hills and mountains. So, with that in mind, here are three options for bases for hiking vacations:

Hittisau is a good base for the lower Vorderer Bregenzerwald. With a nearby reservoir and the streams that feed it, plus the local hills, there is a good variety of hiking on offer. It is also one of the communities which makes up the Naturpark Nagelfluhkette – a cross-border nature reserve consisting of German and Austrian villages and land.

(Because the province of the Vorarlberg is the only Austrian province not to have implemented statutory protections for ‘nature parks’, the Nagelfluhkette nature park is not a member of the official Naturpark organisation – however, the local communities have agreed amongst themselves to respect the Naturpark rules which are applicable in other provinces.)

Bezau is one of the larger settlements in the Hinterer Bregenzerwald (where it starts to get more mountainous). The town is one end point of the Museumbahn steam/diesel train and offers a cable car up to the Baumgartenhöhe. There is also a wide range of walks accessible from Bezau and the neighbouring settlements of Bizau, Reuthe and Mellau, making it a good central base for this part of the Bregenzerwald.

Au and Schoppernau are two separate communities as far as the local administration goes, but in practical terms form a single entity which sprawls along the banks of the Bregenzerach before the valley starts its rise up to Schröcken and the Hochtannberg pass.

Schoppernau has a popular mountain lift up to the Diedamskopf, while Au lies at the foot of one of the more distinctive peaks in the Bregenzerwald, the Kanisfluh. To the southwest of both villages there is a range of walks through forest and mountain pastures underneath peaks such as the Hörnle and the Zitterklapfen.

To check accommodation availability, enter the dates of any proposed stay and use the ‘+’ and ‘-‘ signs on the map below to scroll in to see more accommodation or out to see further accommodation in the Bregenzerwald region. Click on the prices for more information about the accommodation. 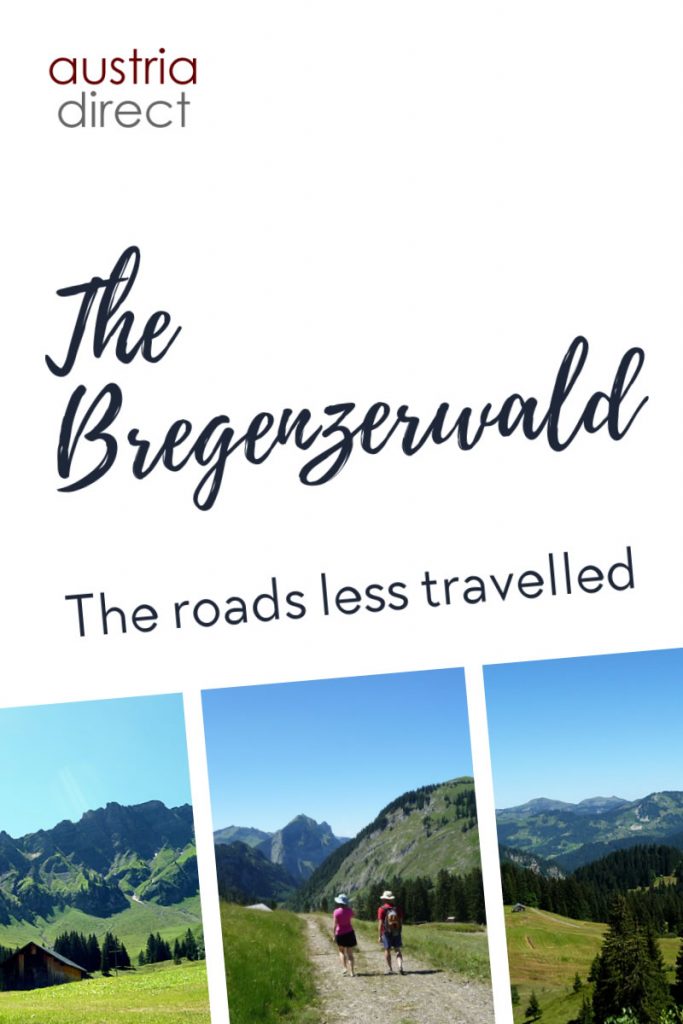