The Gesäuse region is an area in the northern part of Styria which is famous for the rapids on the River Enns and its steep limestone peaks to either side of the water.

It is the newest of all of Austria’s national parks and was only created in 2002.

The Gesäuse National Park covers around 110km2 of mostly mountainous terrain, although there are proposals to expand the boundaries by around 10%. The distance between Hieflau and Admont is around 16km and follows the course of the Enns through the valley that it forged in the mountains to either side. From north to south as the crow flies, the distance is about 12km.

The park itself is a popular destination both for its water and its mountains.

Kayakers and rafters enjoy the stiff rapids at the entrance to the park on the Admont side and the spectacular scenery through rocky promontories on either side is one of the most-publicised features of the park.

Mountaineers have trained on the tough peaks of the Gesäuse for many decades. The highest mountain is the Hochtor at just under 2400m but the relatively low altitude of the peaks in the park compared to other parts of Austria bears no relationship to the difficulty of the climbs.

The walks in the area can also be tough given that the lowest point is just under 500m and there is often a substantial altitude difference to overcome. Having said that, some of the most-loved trails in the area, especially on the outskirts of the park such as the Johnsbach Alm Trail, are in alpine meadow landscapes.

History of the Gesäuse National Park

The original proposals for a protected area in the Gesäuse mountains date back to before the First World War. Much of the land had by this time come under the protection of the Styrian Forestry Commission.

Over the years there were many proposals for hydro-electric power schemes and eventually, following the idea for an electricity-generating plant at the scenic entrance to the valley in the 1970s, popular opinion started to push for more protection for the region.

In 1988 the entrance area – the Gesäuse-Eingang – was declared a natural monument. Despite some opposition by private landowners in the region, eight of the affected settlements in the area voted to back the plans for a national park and it was finally agreed in 2002 by the Styrian Provincial Government. International recognition as a Category II National Park followed a year later by the governing body, the IUCN.

How to Get to the Gesäuse

The Gesäuse National Park is located on the northern border of Styria and usually reached via the motorway which connects Graz and Linz – the A9 Pyrhn Autobahn. Motorists coming from the east, especially those from Vienna, face a cross-country trek on non-motorway roads between Wiener Neustadt and Leoben if they plan to take the most direct route. An alternate cross-country route would be to head south from the town of Amstetten on the A1 motorway.

There are small villages on all sides of the Gesäuse but the only sizeable population centre in the area, and certainly the one with the best connections and infrastructure, is at Admont on the western side of the park.

The closest airports are at Graz (120km) and Linz (110km) – however for a decent choice of flights, the options of Salzburg Airport (180km away with a good range of charter flights in season) and Vienna (240km – connections befitting the capital city) might come into play.

The main railway station for the Gesäuse would be in Admont and there is actually a train service running through the National Park between Admont and Hieflau on the weekends. However, this service is frequently replaced by buses due to engineering works. The nearest train stations with decent connections to other parts of the country would be Liezen, which is on the main train line between Salzburg and Graz, or Ardning, which connects through to Linz to the north. There are regular bus connections to Admont from both stations.

Best Accommodation Bases for the Gesäuse

Admont is a well-known small town on the edge of the National Park, famous for its abbey which dominates the centre of the town. There are regular bus services through to the National Park pavilion at Gstatterboden and to Johnsbach on the other side of the mountains. For those with cars, it is about a 20 minute drive into the heart of the park. Admont is easily reached from the A9 Pyrhn motorway or via public transport as described above.

Those who want to sample Gesäuse village life right in the Styrian mountain landscape could do far worse than staying in the hamlet of Johnsbach. It is one of the collection of 17 “Mountaineering Villages” in Austria – a marketing organisation set up to promote the traditional way of life and sustainable alpine tourism in the mountains across the country. The mountaineers’ cemetery in the parish church is a sobering visit for any visitor planning on taking in some of the more difficult routes in the area.

Check accommodation availability in the Gesäuse National Park area with this map from Booking.com. Use the ‘+’ and ‘-‘ signs to zoom in on an area and reveal more options. 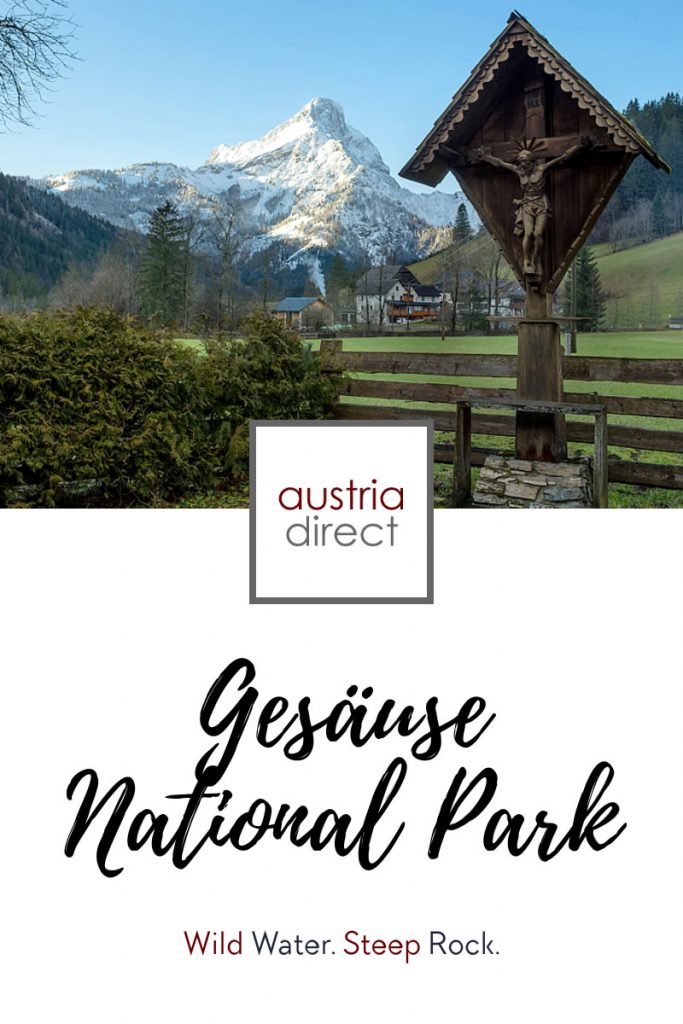