A settlement on the current site of St. Pölten was founded by the Romans, who built a town called Aelium Cetium here in the 1st century. It is one of the oldest towns in Austria.

Who was St. Pölten?

St. Pölten is a corruption of the name St. Hippolytus. Two monks founded a Benedictine monastery here in the 8th century which was dedicated to the saint (the patron saint of horses). The body of the saint was later brought here and the original site is where St. Pölten Cathedral now stands.

What to see in St. Pölten?

St. Pölten has a compact old town filled with historic buildings from the Baroque style of architecture.

The city tourist office is located on Rathausplatz and this open square makes a good start for a walking tour of the centre of St. Pölten.

Most of the facades of the buildings in the square date from the 17th and 18th century, with the town hall (16th century) facing the Franziskanerkirche (18th century). In the middle is the ornate column dedicated to the Holy Trinity (18th century).

The bustling open square is a pleasant spot to relax and people-watch, with plenty of bars and restaurants and open-air seating to choose from.

A block to the south of the main square is the former Institut der Englischen Fräulein (‘Institute of the English Girl’) – a school for girls founded in the 18th cdentury and considered one of the finest Baroque buildings in the city. (The ‘English Girl’ reference relates to the British nun Mary Ward who founded the Congregation of Jesus in the 17th century to promote female education.)

St. Pölten Cathedral is located a couple of blocks to the east of Rathausplatz. This massive complex in the centre of the city was originally a Benedictine monastery and was subsequently taken over by the Augustinian order. After a number of fires and war damage over the centuries it was finally rebuilt into its current Baroque style in the 18th century.

The cathedral itself was originally the monastery church and the interior is filled with Baroque decoration and ceiling frescoes.

The Domplatz square is used as a city car park but the small Herrenplatz square nearby is one of St. Pölten’s loveliest spots with tables spilling out onto the street from its cafés and restaurants.

The Bischofstor gate and garden to the east is one of the nicer views of the cathedral complex and those exploring St. Pölten on foot are now moving into the more administrative area of the city, with the Bezirkshauptmannschaft building and the war memorial in the little square outside the Bischofstor.

A short walk further to the east brings the Landhausviertel on the banks of the Traisen river. The Landhaustor (‘gateway to the state capital’) is the modern entrance to this building complex constructed in the 1990s to house the state government and museum.

The area also includes the Festival Hall and the Klangturm tower, which gives spectacular views over the city and surrounding countryside.

Although there may be little of historical interest here, the contemporary architecture of, for example, the ship-styled state government building as well as concerts and exhibitions at some of the state buildings and the quiet setting down by the river make it a pleasant place to spend a few hours.

When did St. Pölten become the capital of Lower Austria?

St. Pölten only became the state capital in 1996. Why? Because the inhabitants of Lower Austria were fed up with decisions about the country areas being made in Vienna, which also has the national and its own city government. They forced a referendum in the 1980s which chose St. Pölten as the new administrative centre for the province.

Where to stay in St. Pölten?

St Pölten has a mix of larger ‘business hotels’ for seminar and congress use and smaller city centre accommodation. Here are a few different top-rated types of accommodation available in the town:

Cityhotel D&C
This large business-style hotel is located on the edge of the St. Pölten pedestrian area and only a few minutes’ walk from the main railway station. It is one of the top-rated hotels in the city from users of Booking.com.
Website: www.cityhotel-dc.at
Check Availability

Das Alfred
Das Alfred describes itself as a ‘design budget hotel’. It is located just off the A1 motorway near the VAZ congress and trade show centre and on a direct bus line to the centre of St. Pölten. The hotel also boasts a rooftop terrace bar.
Website: www.dasalfred.at
Check Availability

St. Pölten Youth Hostel
The city’s youth hostel is integrated as part of the new main railway station building. The hostel offers beds for 50 people mostly in family rooms but with a limited amount of double and triple rooms. A breakfast buffet is also available.
Website: www.oejhv.at
Check Availability

Alternatively, take a look at some of the accommodation of all types shown on the map below from our travel fulfilment partner Booking.com. The map can be zoomed in and out by using the ‘+’ and ‘-‘ signs and more information about the accommodation is shown by hovering over or clicking on the prices.

How to get to St. Pölten

The main railway station in St. Pölten is just outside the city centre. It is on the main line between Salzburg and Vienna and there are regular services to all main Austrian cities. Vienna is around 30 minutes away by train, while the journey to Linz takes around one hour. Regional services also link the city to Tulln and Krems on the Danube, while the narrow-gauge Mariazellerbahn heads through the Mostviertel and deep into the mountains of northern Styria.

The A1 Westautobahn runs just south of the city, making St. Pölten a good location for a stopover on a longer journey. 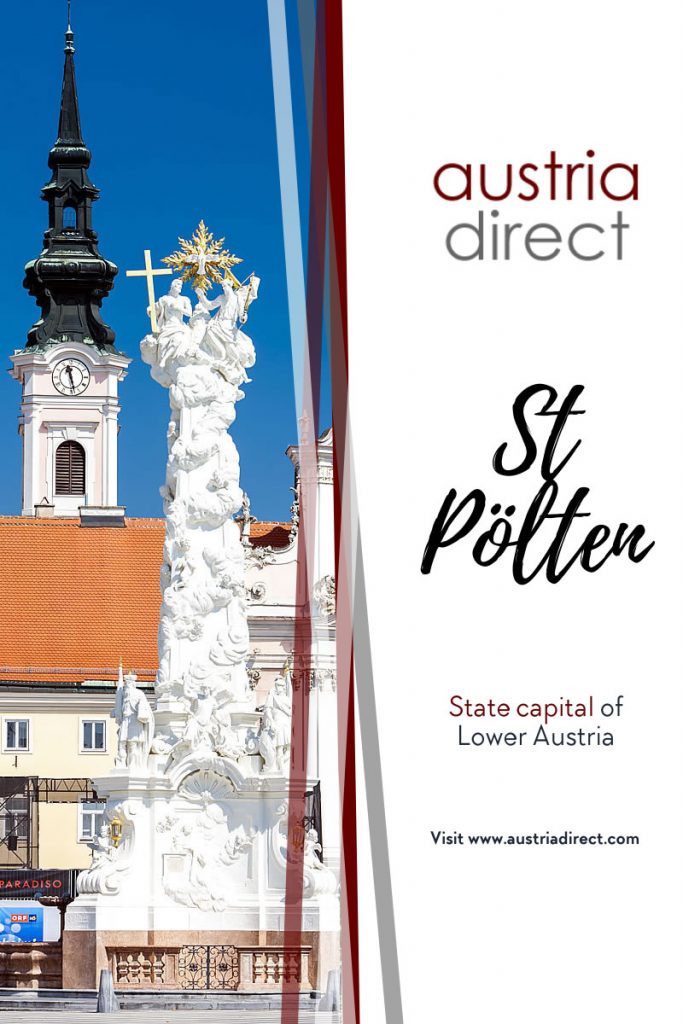