The ruined fortresses at Ehrenberg above Reutte in the Ausserfern region of the Tyrol are clearly visible from the town. Drivers heading south on the Innsbruck road will pass in between the ruins and under the spectacular highline179 pedestrian suspension bridge.

The Ehrenberg castle complex consists of three former fortresses from different historical eras (two on one side of the road and one on the other), the aforementioned pedestrian bridge which links the two, and a museum and funicular railway at the valley floor near the visitor car parks.

It is still one of the most important European examples of a fortification complex from the Middle Ages.

The original Burg Ehrenberg was built at the end of the 13th century by one of the rulers of the Tyrol. It was supposedly built to protect the trade route which salt traders used to send their wares to southern Germany. The main function, however, was to collect tolls from those who used the tracks past the walled checkpoint – the rulers of the Tyrol used to lease out those rights in order to raise money for their own expenses.

Originally the fortifications consisted of the Burg, or castle, on the heights above the trade route and the Klause down in the valley, where a smaller protective wall and bulwark were constructed and where toll collection would take place. (Nowadays this is where the car parks, the museum and the bottom of the funicular railway to the Ehrenberg ruins are located.)

The Burg Ehrenberg part of the ruins was captured a number of times during the religious wars of the Middle Ages (eventually leading to the construction of the other fortifications in the complex).

There were plans by Austrian government to construct a large fortress in the 18th century. However the necessity for this type of massive fortification had changed because of military technology and the fortifications were abandoned towards the end of the century. The fortress system was sold and exploited as a quarry before falling into ruins.

A conservation organisation “Rettet Ehrenberg” (Save Ehrenberg) sprang up in the 20th century and, since then Ehrenberg Castle, still privately owned, has been restored and developed as an important visitor destination in the Ausserfern region of the Tyrol.

The original plans for a fort on the Schlosskopf stem from the 17th century and the necessity for some kind of protection was shown in 1703, when the Tyroleans managed to wrest Ehrenberg Castle back from the occupying Bavarians by hauling cannon up a forest trail to the heights.

Work on the construction started in the 18th century but the massive fort was never occupied by the military and was sold off near the end of the century. It remained an overgrown ruin until the turn of this century, when the trees and undergrowth on the summit were removed and access improved for visitors to the ruins.

This spectacular pedestrian suspension bridge links the two sides of the valley above the Ehrenberger Klause. It can either be accessed from just under Ehrenberg Castle or from Fort Claudia on the other side.

The 179 in the title relates to the road beneath (the B179 Fern Pass road) and not the height or length. The bridge is actually 114 metres above the ground below and just over 400 metres in length. (At the time of its planning, the aim was for it to be the longest in the world – it has since been overtaken by one in Russia.)

There is a charge for crossing the bridge and tickets can be purchased from machines at either end.

The Fort Claudia on the southeastern side of the road was a later addition to the main fortifications, mainly because the hill that it sits on had served as a way for enemies to flank and attack the original defences in the past.

The Fort is named after Claudia de’ Medici, the wife of one of the rulers of the Tyrol. It was built in the 17th century and like the other ruins above, fell into disuse after it was no longer strategically important. In recent years the ground inside and outside the fort has been cleared to make it easier for visitors to appreciate the fortifications.

A Visit to Ehrenberg Castle Complex

Extensive car parks are available for drivers on the valley floor near the old Klause toll gates. Bus services from Reutte also stop near the entrance but there is no return service. It is a relatively easy walk from Reutte of around 45 minutes one way.

The three ruins can all be visited without payment (as long as there is no planned event being held there, such as Advent celebrations or the regular costumed tournaments). There are charges for the car parks, for the funicular which accesses the level of Ehrenberg Castle from the valley floor, for the museum and for the highline179 pedestrian bridge.

It is possible to walk to all three ruins without using the funicular, although the routes on forest paths are steady climbs and descents. A popular route would be to walk to Fort Claudia to admire the views of the other ruins across the valley, then to cross the bridge and explore Burg Ehrenberg. After a visit to those ruins, there are two options for those who wish to attempt the climb to the Schlosskopf and the views out over Reutte and the Lech valley. There is a steep climb through the trees which departs directly under Ehrenberg Castle or the longer and more circuitous route on forestry trails, which is accessed via a junction on the path from the valley floor to Ehrenberg. 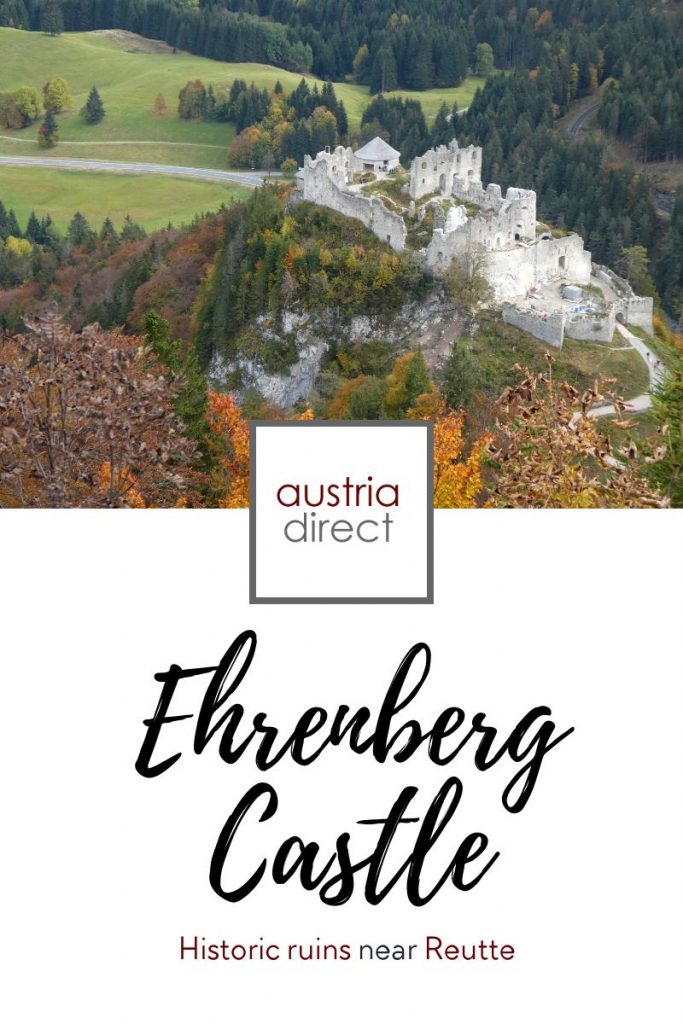